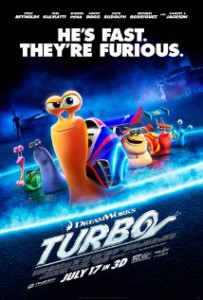 This was a decent film, but is very unbelievable even for an animated Dreamworks film. Turbo is about a snail who receives magic powers that make him go fast. With these powers, he enters the Indy 500 to race alongside him longtime hero. The way the snail receives the powers and the way he does 226 MPH without even damaging his texture is what amazes me. The ending is comedic for all of the wrong reasons when the Indy 500 becomes a foot race. Things i liked about this film was the amazing cast which included Ryan Reynolds, Paul Giamatti, Samuel L Jackson and Michelle Rodriguez. I enjoyed the animation as Dreamworks is always on top of their game with great 3D and visual effects. In the end, i think this film is definitely geared for ages 9 and younger. Unlike Shrek, Despicable Me and Toy Story, i can’t imagine many teenagers or young adults getting an enjoyment from this. Overall, i recommend this film if you are bored and looking to get out of the house. I would honestly wait till the dollar theater shows it, but to each their own.