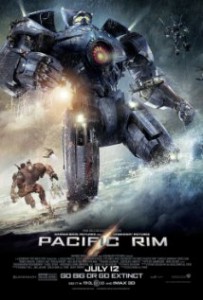 This film was like a mix between The Power Rangers movie and Real Steel. I will first of all start by saying that i enjoyed this film a lot more than all three Transformers films and Battleship. This film has a lot better characters and real life drama than those films could ever comprehend. This movie is a big war with robots taking on monsters that appear out of a portal from the ocean floor. My only problem with that premise is that it never explains why the portal is there in the first place. I would’ve liked some background on when the attacks started, but instead we arrive midway through a random attack of San Francisco. Another problem i had was the training class of stick jousting. I understand why they had to do it, but why couldn’t it just be a boxing class? The robots don’t use sticks so why do the trainees have to? Stuff i liked about this film was the cast. Idris Elba has always been an amazing actor in my opinion, and he really adds a dramatic layer to this film. Charlie Hunnan is great in the lead role that gets a little cliche at times, but gives us more than a typical jock in this role. In my opinion, the action was 2nd to none in 2013 film, and i would definitely be curious to see how this film looks in 3D. Overall, i recommend this film for the action buffs. I think it provides a good story with tons of great fighting scenes between the robots and the monsters.