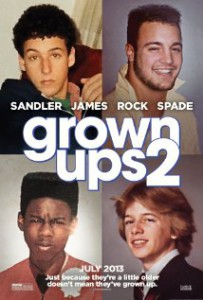 Ohhhh my Lord, where do i start? This film was absolute garbage in it’s purest form. I laughed a couple of times, but those were at the jokes that have the most obvious punchline. Adam Sandler plays the biggest douchebag i have ever met who continuously insults him children, is a non supporting husband and acts like he has unstoppable power in making the decisions for the family when he doesn’t even have a job. The humor is the goddamn pitts. One joke calls for Kevin James to burp, sneeze and fart at the same time. Now i know people are going to insult me and say that i shouldn’t watch a movie that i know is going to be trash. You guys have to realize that i do these things for you. I try to put out the warnings to help you before you spend money. I also know that there will be people who will now make it their mission to go see Grown Ups 2 and tell me how wrong i was because they like to argue. But i am going to cut straight to the point. If you like this film, you are a moron. You will find even the dumbest thing funny and there is no help for you. There was one thing i liked about the film; Salma Hayek’s breasts bouncing. THAT’S FUCKING IT!!!! I don’t think this was the worst film of the year, but it’s pretty damn close. I am one of those people who enjoyed some of the charm of the first film, but it’s absolutely gone in this shit bomb. Amazingly though, none of those things were my biggest problem with the film. They actually had CGI shots for this film that included a fake deer and a fake tire going down the road. But that’s not quite my problem, it’s the fact that it’s the worst CGI i have ever seen in my life. This looks fake for Birdemic standards. I totally don’t recommend this film to anyone, but i know people are going to love it because i trashed it so bad. In the words of a good Adam Sandler flick i leave you with this quote ” Mr. Madison, what you’ve just said is one of the most insanely idiotic things I have ever heard. At no point in your rambling, incoherent response were you even close to anything that could be considered a rational thought. Everyone in this room is now dumber for having listened to it. I award you no points, and may God have mercy on your soul”.