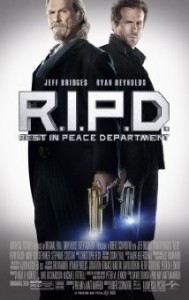 This film really surprised me a lot by how much i liked it. First of all, Jeff Bridges is phenominal in this movie. Had it not been for him, i probably would’ve knocked this film down to a 6. That is how important he is to this film. Aside from Bridges, you can just tell that everyone had fun making this picture. It radiates from some of the cheesiest dialogue of the year as they do it with a smile. This film did remind me A LOT of Men In Black. Infact, i could probably write a paper describing the similarities, but i would rather not. I also enjoyed the great action and some of the ugliest monsters i have ever seen. Some of the things i didn’t like were just two big questions i had. 1. If Ryan Reynolds isn’t allowed to say his name, then why doesn’t he just say the name of the killer? There is no rule what so ever about that, and even if his wife doesn’t know it’s Ryan Reynolds telling her, she at least knows who is responsible for his death. 2. Why don’t the mirrors reflect their avatar identities? It would be impossible for the mirrors in the car or in the bathrooms to show Jeff Bridges or Ryan Reynolds unless they were dead too. Last time i checked, mirrors don’t have lives, so it will always be a mystery. This film got a lot of criticism and is considered the biggest box office bomb of the summer. To be completely honest, i don’t understand it. With films like Grown Ups 2 and The Smurfs 2, i can’t imagine how this film does worse. I don’t feel that it is for everyone, and only 50% of the audience (maybe less) will like it, but i recommend it for having a good time at the movies. Above all else, Jeff Bridges kicks total ass AGAIN.