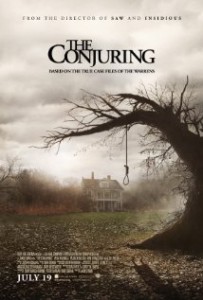 I really enjoyed this horror/suspense movie about a family that is the victims of a possession. Based on a true story, this film has been receiving mostly positive reviews with even some comparing it to The Exorcist. Personally, i thought the film was done really well with great acting and a lot of visuals that make the non-horror fan very scared. I don’t think deep horror fans (like myself) will be that scared or bothered by this film. I found 2012’s Sinister a little more bothering to me. That doesn’t mean that this film doesn’t deserve the praise it’s getting. The Conjuring tells a very creepy story that makes you wonder how this family is ever going to get out of it. Some of the negatives of the film was the weak body count and a somewhat anti-climatic ending. Some of the positives was the great acting led by Vera Farmiga as a psychic with the ability to see demons.Also, i don’t praise child actors often, but i thought they were outstanding in this film. All five of the children add something to a great formula. I also think the musical score is one of the best of the year. I think the music in particular is where a lot of the comparisons to past horror films comes from. I would recommend this film to horror fans new and old who are looking for a recipe on horror films done right. There have been many done wrong in the last 15 years, but The Conjuring is one that we will be talking about for years to come.