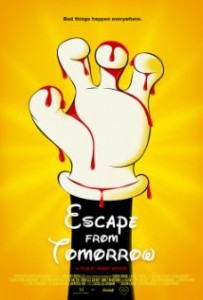 WOW!!! What the hell did i just watch? Disney World is put under a dark side in this film that resembles Fear and Loathing in Las Vegas. For those of you who don’t know this film was shot entirely guerilla style at Disney World without Disney’s permission. Because the film changes the music in the background, it does qualify as legal use. Disney have distanced themselves from this film and i totally understand why. First of all, the good things. It does have a decent premise that would have been much better under a different and more experienced director. They were going for the whole secret side of Disney thing here, and i can get behind that. It’s execution is done so weird and pointless that you wonder what the hell you just watched. The acting (Even for amateurs) is pathetic. I am going to go on a limb and say anyone associated with this film will probably never work in cinema again. I also liked the music in the background of the film. I think that some of the music mixed with the beautiful noir black and white shots makes for some enjoyable moments. The problem is that those moments are few and far between. This is one of those movies so bad that it has to be seen to be believed. I find it amazing how they filmed this whole movie on Canon cameras and Iphones because some of the shots leave you wondering how the hell they did that. I just wish more effort would have been put to the actual script itself. I never thought i would see one of the best films i have ever seen and one of the worst in the same week, but i am far past surprised in this business, anymore