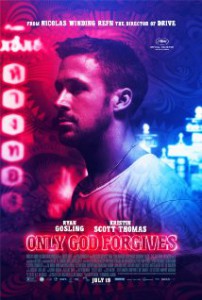 This review will no doubt be the weirdest and most contradictory of all of my reviews. First of all, i want to say that i enjoyed the film. It was definitely a good old fashioned Japanese revenge film. It reminded me a lot of the kung fu films because of the graphic violence of it. I also enjoyed the cinematography and the way the film was shot. Nicolas Refn sees a world in his films that is both beautiful and frightening. He is a director that i really enjoy, and i felt he did a good job here……..mostly. On the negative side, i can fully understand why this film was booed at Cannes Film Festival. This movie definitely isn’t for everyone, and i will go ahead and tell all of my readers that i would be very surprised if anyone else likes this movie. One thing that is good and bad about this film is that it’s dominated by the performance of Vithaya Pansringarm. Make no mistake about it, this is his movie. As much as you are told in the trailer and synopsis to hate this man, he is the guy you will feel the closest to. You understand why he does the things he does. Ryan Gosling and Kristen Scott Thomas are kind of wasted here. It’s a shame because you have great actors like these two in the film and they are practically on sleep mode the entire time. Only God Forgives will go down as possibly the only film i have ever liked and not recommended at the same time