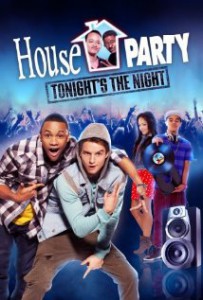 What a complete pile of crap. It’s sad to think of how great the first three movies were of the franchise and see what it’s become. Even the 4th film (Ferris Bueller rip-off) entertained me more than this. I am going to get out of the way the one thing i liked about this film and that is Kid N Play returning to cameo in the roles that made them famous. My problem with it however is that they are in the last 2 minutes of the movie. They make us wait 88 damn minutes for a 2 minute cameo that isn’t that good. This film made me miss Grown Ups 2 with it’s horrible dialogue and acting. It looks like they pulled a bunch of kids off of a high school acting class and let them do their thing. If that doesn’t do it for you then maybe insulting fat people by making them break the floor during a sex scene. Yeah, that’s sure to get a laugh out of everyone, because fat people should only be used for trashing. There is also pedophilia with a 50 something neighbor coming to the party to hit on the 17 year old main character. She is about as trashy as your worst nightmare while lifting her skirt and mentioning how wet the main character has made her. This film is so bad and it knows it that it references other films and TV shows (Twilight, True Blood). One thing i always find funny about these films are the fact that everyone can dance. Now, i’m not talking about a dance movie like You Got Served or Step Up, because those people are supposed to be trained dancers. This is a high school movie with kids who can dance better than an Usher video. Another funny part is when the token bad guy shows up and punches out the main character, and actually walks out to boo’s. WHO DOES THAT? If this isn’t enough, they even insult and poke fun at the first House Party by naming the main character Chris and then insulting the Kid N Play dance move by calling it whack. People in glass houses shouldn’t throw stones. The ending is left with the biggest form of unbelievable as Chris’s best friend fixes the mess by selling his car. That’s fine and dandy, but how did he fix the huge hole in the floor in less than 8 hours? Better yet, how did he sell his car between the hours of 3 AM and 9 AM? I don’t recommend this film to anyone, and you can definitely look for it on the bottom five of my end of the year countdown.