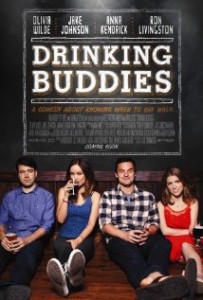 Not a bad little film, but i felt like the ending left something to be desired. Drinking Buddies is a film about two couples who go on vacation together and cheat on each other. The results are one relationship ends while the other continues until the truth is revealed. When i saw the trailer for this film, it screamed comedy. That is a very wrong representation. This film reminded me of a Kevin Smith Chasing Amy kind of drama. It stars a great cast of Olivia Wilde, Ron Livingston, Jake Johnson (Nick from Tv’s New Girl), Anna Kendrick and Jason Sudeikas. It’s funny that this film has Johnson in it because this film plays off as an episode of New Girl. It waits and waits and waits for Johnson and Wilde to hook up, and even dragging it out for the better part of the 90 minute run time. That was probably my biggest problem with the film; it was just incomplete. It drags in the middle while trying to bring these two together, and then the ending doesn’t even give you a definitive closure on all of the characters. I really think they could’ve invested more time in the dialogue and made these characters more presentable to the audience, but what you get is a film that seems like dragging even in only 90 minutes. One thing i liked about the film was the representation of alcoholism as Wilde and Johnson work at a brewing factory. Wilde’s character can definitely be described as an alcoholic and we see her life spiral down in shambles because of bad decisions. I recommend this film now that it’s out on DVD because you will only be spending a buck or two. I definitely feel it’s worth those dollars, but you will finish the movie wondering why you wasted 90 minutes on this film instead of something much better. There are definitely MUCH better dramadies that have come out in recent years