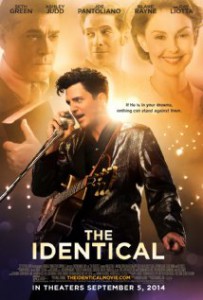 The story of twin brothers seperated at birth because the parents could only afford raising one child. Both children turn out to be amazing singers with one becoming the biggest rock star in the world. The Identical is easily the sloppiest film i have seen in 2014. That doesn’t mean it is the worst movie i have seen, but it is pretty damn close. What made this movie a guaranteed failure was the movements of actor Blake Rayne playing both of the brothers as Elvis rip offs. When i first saw the trailer to this film, i thought it was a biopic on Elvis Pressley, but then i heard that the brothers names were Ryan and Drexel, and immediatly i was confused. Why would you make a film with a singer who looks, acts, sounds, and moves like Elvis Pressley and then name him something else and change the story completely. The story isn’t good or compelling at all, but i would’ve had more respect for director Dustin Marcellino if he would’ve given his musical act an original feel. I can only imagine that they had trouble with the licensing rights from the Pressley family, but that is even defunct when the film mentions Elvis Pressley a couple of times. So we are led to believe that it’s ok to live in a world where not one singer looks and sings the same, but three different singers (Elvis included) do it? Ridiculous. I know the pop music haters will come back at me with every singer looks and sounds the same, but consider this movie to be like if Kesha looked like Britney Spears. That is the kind of logic that The Identical uses. The soundtrack is unforgiving with generic Elvis songs because this isn’t Elvis’s story. The songs feel like B-side Elvis songs that The King passed on to write the stuff he was legendary for. On top of it, there isn’t many of these original songs to go around so we get to hear them played over and over again. No one can listen to these songs and tell me that they weren’t going for an Elvis impersonator. Think whatever you want about my review writing, but i’m not acceptable to a movie that was this lazy. Why don’t we just make a rock star impersonator franchise and put Jimi Hendrix in Ghostbusters 3? The makeup and wig work is laughable for all the wrong reasons. Ryan’s hair grows and trims itself without any explanation what so ever. If he is wearing wigs, we certainly don’t see it from the awful editing work going on behind the camera. The funniest thing about the makeup to me came in the effect of Ryan’s parents played by Ray Liotta and Ashley Judd. Liotta is made to age right along with the decades that pass in the story. He inherits a head of greys and wrinkles on his face that give him the distinction that 30 years has passed. However, Ashley Judd apparently didn’t want to wear makeup or they ran out of the budget because she never ages more than a year during the whole film. There was one point towards the end of the film where i had to remember that she was married to Ray Liotta and wasn’t his daughter. Liotta is the only performance worth anything as a preacher who is wound a little too tight when it comes to the next generation of teenage interests. He plays the role with enough responsibility and love from a preacher who adopts a child that he wasn’t quite in agreeance to. Judd is Judd. Same hollow emotion behind her usual smile. Rayne is alright, but he is basically being Elvis even when he isn’t supposed to be. If this is an Elvis film, then yes he played the role perfectly. But since it’s not, his performance comes off as simple and uninspiring. The best note about the cast is the terrible miscasting of Seth Green as a groovy drummer and Ryan’s best friend. He is so laughable and so eye rolling in the character of Dino that i found myself exhaling as hard as i used to when my Dad would try to rock out to Grunge Music. It just doesn’t feel right, and with the exception of Will Smith as Satan (Winter’s Tale), this is the worst miscasting of 2014. The film ends after 102 minutes that feel longer because of the terrible pacing and rushed scenes when it’s trying to tug at the heart strings of any kind of emotion. The film’s end feels like we have watched our main character for nearly 2 hours and yet we still know nothing about what is going on inside. The Identical is sloppy, bland, and devoid of any intentions. It’s like they set out to make an Elvis movie and couldn’t get the rights halfway into the film, so they just changed the names around. It’s a good thing the King has left the building because Elvis would find new meaning to the words “Don’t Be Cruel” after slop like this. Not recommended at all.