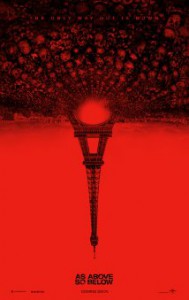 A team of explorers search for a lost rock beneath the catacombs of Paris, France in the newest found footage film designed to give you nightmares. As Above So Below is the worst kind of film that you could possibly encounter for an array of reasons. The first is that the plot is actually intriguing enough to get your curriosity flowing. I did a report on the Paris Catacombs in high school, and the caves in them are just begging for a scary movie to be made down there. You get sucked in and then you immediatly regret the decision to spend money on it when you see the presentation. Even for found footage movies, the camera work in this film is awful. Most of the time, you find yourself confused on what you are looking at. It is even more aggravating when a character will say “Look at that” and you can’t tell for one second what is present in front of the camera. It moves around too much and that hurts a film that relies on scary visuals. I won’t say it’s pointless because for once it actually makes sense why everything is being recorded. The main character of the film (Perdita Weeks) is being interviewed for a documentary about her uncovering some great mysteries in the catacombs. Each character is equipped with a helmet camera and it makes sense. What sucks is that we get the feel of constant quick reactions every time a character is scared or hears something. Another thing that annoyed me about the film was just how conveniently these characters figured out mysteries that are a thousand years old. Like i’m sure no one else figured out to touch a tombstone a certain way to get the wall to move, or no one else could figure out the verbal clues given on the walls all around the catacombs. Our characters figure things out like they are sharing the same brain, and it’s aggravating because unless you study alchemy or ancient scriptures, it will all be greek to you. I found myself still stuck on the start of the sentence when these characters have already figured out what moves walls. I mentioned Alchemy before because it’s interesting how much of this film is more about that than Hell and the Devil. I was led to believe that this was a movie about the gates of Hell, but it turns out that it’s more about rocks and the powers that they behold. The film is only 88 minutes and the first 50 or so establishes nothing with no death scenes and not much backstory for the characters. When the film has about 20 minutes left, it starts killing off characters because the movie needs to end soon and we haven’t done much with the threats of this cave. It’s just utterly sloppy. The ending is so frustrating because it’s more of the “Love conquers all” kind of thing. It’s crazy because you wouldn’t expect anything like that in a movie like this. It seriously made me angry the way that this film ends because it’s unlike anything you would ever dream up. I found myself asking how this ending couldn’t have been done 40 minutes prior to this. I won’t give much away, but it’s a solution that was right in front of our characters eyes the whole time. The lone thing i enjoyed about this film was the setting of the actual catacombs. I appreciate that this film was shot mostly in the Paris caves as it shows more on camera than you are used to seeing in documentaries. I just wish the setting had a better story to capitalize on what could’ve been the scariest film of the year. I definitely cannot recommend this film to anyone as it is one of the worst films i have seen in 2014. In closing, if above is anything like below, then leave it as well as this film buried with Paris’s terrible past. The Catacombs hold the remains of about six million people. Hopefully the film won’t affect as many people.