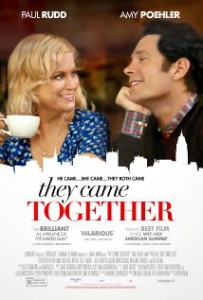 Paul Rudd and Amy Poehler star in this spoof on romantic comedy films. First of all, Rudd is the perfect choice for the lead role not just because of his smooth comedic timing, but also his experience in many 90’s romantic comedies that he himself starred in. Poehler is absolutely adorable in this movie. The chemistry between her and Rudd is what really brings the film higher than it would ever be lifted with two other stars in these roles. That is to say They Came Together hits and misses, but it’s the way the film’s two leads bounce off of each other that makes it push even further than it ever should have. The comedy in the film is hit and miss at times. I found myself laughing more in the second half of the movie because that is when the film ventured into David Zucker territory with the sight laughs like a pole sticking out of a waiter’s butt for more than one scene. Also the quick jabs that you may have to rewind to make sure you heard it properly. It’s in those minutes where this film by director David Wain feels more of a movie and less like an NBC sketch show. During the first half of the film, the jokes are weighed down dramatically by Seth Mcfarlane kind of jokes. These are the kind that drag on for way too long and will be having you begging for the next scene. I understand that it’s all supposed to be kind of intentional because we are poking fun at the films that do this, but those kind of gags never work and it’s best to just leave them in the dust where they belong. One thing that is good about They Came Together is that if you can get past the corniness of the film, the movie does have good replay value. It’s only 83 minutes, so it’s a very short sit, but this film does pass even for a romantic comedy. I wouldn’t say the comedy was gut busting funny, but it was good for a couple of laughs that made you have to do a double take. The camera work is something strictly off of an NBC TV show set like Community or The Office. I wouldn’t be surprised if they used the exact same cameras as in Community since the star of the show is Poehler herself. It’s a bit of shaky cam work that narrates itself into seeing the punchline of most jokes before they ever hit. I also dug the cast a lot too. I am a big Bill Hader fan, so to see him get some film time was an extra incentive. Max Greenfield plays Rudd’s brother perfectly to give them that relationship that feels like these two really did grow up together. I think he has a bright future when New Girl ends, and it would be nice to see him in more romantic comedies like this one. Christopher Meloni gave me possibly the loudest laughs of the movie playing a dimwitted boss of Rudd’s character. From Ed Helms to Michael Ian Black to Jack Brayer to Keenan Thompson, it feels like an NBC all star game with many coming out parties from TV favorites. As i said before, the film is very short but i feel that it ends at a point when the movie started to drag anyway, so that didn’t bother me. The problem with They Came Together is that what it settles on as the parody-able thing about romantic comedy is how generic it can feel. There were many times when i felt the spoof was a little overused and i wish they would just continue to develop a decent storyline between the relationship of Rudd and Poehler. It’s tough for this movie to find a middle ground that feels comfortable between going for the jugular and keeping the gags at PG-13. There is one scene in particular with Rudd’s grandmother that was funny but felt like something out of a Farelly Brothers film. That’s the only slight problem i had with They Came Together, it lacks a real identity because it’s using it’s majority minutes to spoof the films before it. Wain works a lot with Paul Rudd, so it’s easy to see how Paul can shine in a movie that isn’t as polished, but still packs on enough laughs to make you smile everytime he and Poehler are on screen. It’s amusing enough summer entertainment with a winning cast and some genuine laughs thanks to the comedic enthusiasm of it’s cast. Definitely worth an on demand or red box ordering. If you like NBC humor, check out They Came Together.