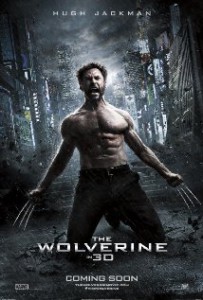 This is the Wolverine film that i have been waiting for. This sequel to the crappy X-Men Origins: Wolverine does things a little better in the story of this legendary comic character. It’s not 100% perfect, but it is getting there slowly. Hugh Jackman returns in a role that i couldn’t imagine anyone else in Hollywood playing. He is simply amazing by this point playing the troubled Logan. Jackman is probably the best casted superhero in any comic book film. This film finally took the dark premise of Logan’s life and brought it to the big screen, and that is something that no X-Men film has done correctly so far. I really enjoyed how they finally showed us the bone structure underneath the claws. It’s the little things like those that can always win me over. I wasn’t too high on the choice for Viper as the villain. She is an amazing character and very powerful, but i have always considered her more of an Avengers villain (comic books or not). It was also pretty comical to see Yukio beating her down. The visuals and shooting locations are beautiful for this film. I have always liked the setting of Japan when filming a troubled story. They seem to get it right with their western culture and beautiful landscapes. Be sure to stay after the credits again as we see build up for the upcoming X-Men : Days of futures Past. The 2 minute bit had me half excited and half wondering where the hell they are going with this film. Overall, i recommend The Wolverine to comic book fans in particular. I don’t think the outside world will get much enjoyment out of this film, but the fans of X-Men and Wolverine will love it.