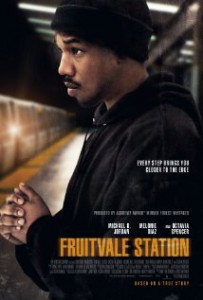 This was a very deep look into the tragedy of Fruitvale Station in San Francisco on New Year’s Eve 2008. An african american male is shot by a caucasian police officer, leaving the family in shambles. This film is heartbreaking in every sense that a man lost his life at the age of 22. He left behind a daughter and a loving girlfriend. I enjoyed the film because it is shot very well. I usually don’t like the “Shot on video” style of films, but this story is a film that definitely benefited from it. Octavia Spencer is the best performer in the film as usual. She always gives such a performance that can tug at the strings of your heart in any emotion. I think she is purely underrated and one of the best actresses in Hollywood today. I also liked how they made a short incident seem longer in an 80 minute film by filling in the blanks. They gave us a great back story that made you care about the change and good things to come in these characters futures. There were a couple of things i didn’t like which included the actress playing the girlfriend. I just think she wasn’t emotional enough to pull off a role of that magnitude. You can’t even tell me for a second that his girlfriend wasn’t knocked to the floor when she heard the news of her boyfriend. Yet she plays it like a headlight in her car just burnt out. The movie is definitely worth a look, but the only problem with true story films is that you never know 100% what is real and what the studios did to enhance a film. The final shot of the movie is done so well and leaves you with a powerful stance when you exit the film. I definitely recommend this film if you can find it in theaters. If not, it should be out on DVD soon.