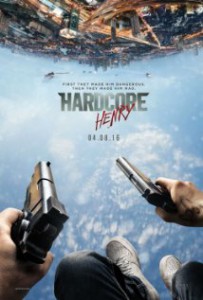 A man awakens from surgery to find that he has gotten a little..hardcore. “Hardcore Henry” is an action film told from a first person perspective. Henry awakens remembering nothing. Mainly because he has just been brought back from the dead by his wife Estelle (Haley Bennett), a medical doctor with some experimental ideas. She tells Henry his name, and gives him a brief rundown of who he is. A few minutes later, the two are being shot at, and Estelle has been kidnapped. Full of adrenaline, Henry vows to get her back by going after the gang who took her. Led by a man named Akan (Danila Kozlovsky), a powerful warlord with an army of mercenaries, and a plan for world domination, Henry finds himself doing the impossible to get back the only love he knows and remembers. Set in Moscow, with everyone wanting Henry dead, the faceless hero finds open arms in a mysterious Brit named Jimmy (Sharlto Copley). Not knowing whose side Jimmy is really on, Henry has to trust his instincts on every decision. If he survives the insanity, and solves the mystery, Henry might just discover his purpose and the truth behind his identity. “Hardcore Henry” is rated R for brutal violence, language, sexual content, nudity, and drug use.

“Hardcore Henry” is gaining a lot of recognition for its unorthodox method of filmmaking, and with the exception of some minor system virus’s, this film packs quite the brutal punch for action fans of all kinds. This certainly isn’t the first time that first person camera work has been done, but this might be the movie that goes all the way with such a concept. For a 91 minute movie, Henry moves at a fast pace, combining high risk parkour stunts with violent brutality second to none in mainstream films over the last couple years. The opening credits that offer some slowed down carnage, perfectly sets the tone for the ass kicking you as an audience member are about to receive. There are some CGI technical effects, but this is a fine example of how to use them efficiently. I’ve always said that the best use of CGI is to fool the casual moviegoer into believing that they aren’t even there, and this movie made even the most illogical of stuntwork believable. What will give this film great replay value is in a DVD that will reveal just how some of the practical stunts for the movie were filmed. One problem with playing it from this dimension is that some of the upclose and tight fight scenes are a little crowded, and lack the kind of on-screen definition for the audience not to move their head searching for answers. Some of these fights did make me yearn for a regular style of movie just so I could see everything played out in a wide angle.

Lets talk a little bit about music, because it’s something that doesn’t get enough credit in films. “Hardcore Henry” provides the very best in musical placement that I have seen in quite a while. The soundtrack that we hear through various chase and fight scenes plays to the kind of mood that Henry is trying to communicate to the audience. If he’s hunting someone down, the speed of the track will be a fast paced techno selection. If Henry is going mad in a violent rage, you will hear jolly rock and roll that communicates he is having the time of his life on a grand scale of revenge. Without these selections, the action doesn’t seem as fun and albeit light- hearted, despite a level of blood that will say otherwise.

The story for the screenplay is a little light on details, considering this is a film about revenge, and a majority of the movie we don’t even really know our main protagonist. This truly is the weak part of the movie for me because character composition feels very much alien during those long stretches when the heart-pounding fight scenes aren’t dominating the screen. There is an attempt by the third act to kind of explain some of this, and while some questions are answered, some things just don’t make sense. I realize that coming down on a movie like this that isn’t supposed to be taken seriously is a little ridiculous, but great stories create great characters, and that’s the one thing that kept me from fully investing myself in this movie. Sharlto Copley was a lot of fun. His alliance with Henry is one of great question, but Copley is the closest thing that we have to a hero visually on-screen, so his presence keeps the movie moving forward. The film feels very much like a love letter to first person video games, so it doesn’t come as a surprise that Copley serves as that information bearer before the next level starts. For much of the movie, i was gleefully awaiting checkpoints to appear, but my love for Sega CD games had to subdue.

“Hardcore Henry” is a tough sell to anyone who isn’t a full-on hardcore (Pardon the pun) action fan. There are some things in the movie that I think will bore the occasional fan, but I think it’s harmless as a rental. My own personal opinion is that “Hardcore Henry” is a passable effort with an experimental gimmick that was a lot of fun. It looks and feels like “Crank” on crank, and is a visual rollercoaster for the strong stomachs.