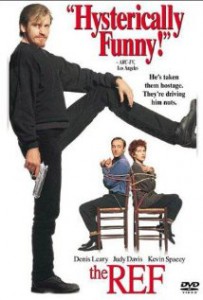 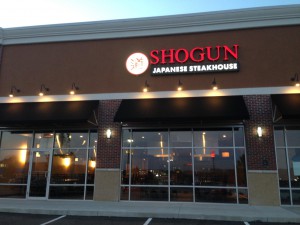 Everyone has their own choices that they watch every holiday season. For me, the one that always puts me in a joyous mood is the one that exploits the real negatives of Christmas. “The Ref” is directed by Ted Demme (That Thing You Do), and is a dark comedy starring Denis Leary as cat burglar Gus. On the heels of an already bad break-in, Gus finds himself caught in the middle of Caroline and Lloyd (Judy Davis and Kevin Spacey), a bickering married couple on the brink of divorce, after he breaks into their house on Christmas Eve and holds them and their family hostage. What follows is a cynical, yet viciously funny anti-holiday film that will offer a reflection on tired traditional families.

There is so much to be commended about Demme’s portrait of an American family in the new age. Everything feels authentically rich and original in tone for the genre decades before films like these were released annually. Despite a hardened criminal in Gus, Demme uses brilliant comedic timing, while relying on the quick witted dialogue of his main protagonist. Leary works greatly in this role because the movie is intended in the slapstick variety of film. Think “Home Alone” grew up to be a kidnapping story, but still held on to it’s childish roots. It would be tough for many people to classify this as a Christmas film, but the homage to history is certainly there, most notably with “It’s A Wonderful Life” being shown on the TV throughout the film. A kind of soft heart of domesticity underneath its superficially shallow humor.

While the film’s delivery will bring you to the table, it’s the stellar work of the ensemble cast of Hollywood veterans that will leave you gut busting with laughter in your seat. Besides Leary, a young Spacey commands the attention with his soft-to-loud anger growing louder and louder with each scene. The chemistry between he and Davis is so beneficial to the audience, because as much as we grow tired of their bickering, we are rooting for their recovery selfishly for more laughs. The awkward laughs really get raised a notch when 71-year-old Glynis Johns joins the fun as Spacey’s rudely overbearing Mother. There’s a real rivalry between her and Davis, and it supplies a lot of the honest tension of family gatherings with one-up responses that will have your jaw hitting the floor.

Need a cure from the harsh and unforgiving Winter weather of Akron? Come warm up by the fire and enjoy the best in Asian cusine at Shogun Steakhouse. Housed in the ever-developing area of South Akron, this one-of-a-kind dining experience will tingle your taste buds with the delight of nourishment satisfaction, while offering a cooking presentation umatched in any kitchen. The restaurant offers everything in tastes from Filet Mignon steaks, to chicken and shrimp combos, to a wide variety of house sushis that will have you planning future trips to taste the many fresh flavors. To seal the deal is a well stocked bar that houses some of the best in domestic, as well as foreign alcoholic tastes, sure to please any wide variety of pallate. As far as dining experiences go, this is one that proves a little extra spending goes a lot further than just another satisfying meal.

Upon my innagural visit to the Shogun, i was greeted by outstanding customer service. The staff and crew are very hospitable, and it made me feel very comfortable in a new place. I scanned the menu for the one dish that would perfectly represent everything i was looking for with a familiar taste prepared in a new way. After finishing, i can safely say that all of my readers must try the Steak and Shrimp Combo. It’s the perfect combination of surf and turf, made even more irresistable by the hearty portions and Asian traditional preparations. I was also treated to a side helping of scallops, in which my butter was literally drizzling down the sensuous texture of some of the best Shellfish i’ve ever tried. Shogun is open for lunch or dinner, but the hours are different for each day. Be sure to plan ahead.

You can find more of The Film Freak’s reviews at
Thefilmfreak.com

One thought on “The Ref & Shogun Japanese Steakhouse”