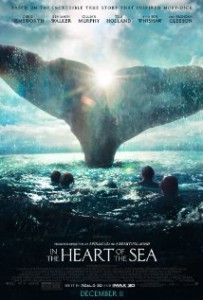 One crew gets more than they can handle, when they lock eyes with the biggest mammal in the sea. “In the Heart of the Sea” directed by Ron Howard, stars Chris Hemsworth, Tom Holland, and Brendan Gleeson as members of a whale hunting ship Essex, during the winter of 1820. After testing their luck, they are assaulted by something no one could believe: a whale of mammoth size and will, and an almost human sense of vengeance. The real-life maritime disaster would inspire Herman Melville’s Moby Dick. But that told only half the story. “In the Heart of the Sea” reveals the encounter’s harrowing aftermath, as the ship’s surviving crew is pushed to their limits and forced to do the unthinkable to stay alive. Braving storms, starvation, panic and despair, the men will call into question their deepest beliefs, from the value of their lives to the morality of their trade, with their captain searching for direction on the open sea and his first mate still looking to bring the great whale down. It’s man versus mammal in the ultimate fight for survival.

“In the Heart of the Sea” has some great ideas, but ultimately it’s not quite the epic telling of the classic story that we need to constitute a different look. The movie is told from a first person account of one of the survivors from the ship relaying what really happened on the expedition to author Herman Melville. I loved this idea for the first half of the film, as the story really started off with a lot of questionable outcomes for everyone aboard the Essex. The first half of this film is definitely the stronger of the two, as the second sacrifices creativity for scenes that are played out far too safely. The crew gets forced rather quickly to make some desperate judgements, but the screenplay is rushed along without ever truly communicating just how much time has passed. Sure, there is some on-screen text from time to time that displays where they are at with the story, but their time spent in this predicament doesn’t quite justify the nasty and gritty responses that come from their decision making. In addition to this, those major judgements are never shown in front of the camera, so the film really loses a lot of it’s steam during the final half hour of the film. The ending is kind of a disappointing one simply because the film builds up this kill or be killed tone, and then goes back on itself for psychologically trying to understand this underwater predator. It’s always a disappointment when a movie peaks during it’s second act, mainly because the film never reaches that equal level of remarkable.

One thing that isn’t a disappointment however, is the brilliant camera work and contrasting tones in overall look of the film for cinematographer Anthony Dodd Mantle. Anthony has done great work for not only Ron Howard, but also Danny Boyle, so he’s definitely no stranger when it comes to appropriate tones for the timepiece setting. He shoots the water as an almost blackish tone of blue, giving the audience a lot of mystery and intrigue as to when the sperm whale will make an appearance. Normally, films will make the water transparent, but it definitely raises the quality of panic when our characters can’t see what is right in front of them. What Howard does so well behind the camera is crafting a chess board collision of pieces, but leaves the biggest moves still ahead so only the audience watching can see them. This does leave it a little predictable at times, but Howard makes up for it in total vulnerability of character that really brings out the fear in those who he shoots. The film has a lot of nice close up reaction shots of the crew, and without those the movie would serve as just another chase movie on water. There was also some really nice symbolic long shots of the whale in the distance compared to the small size of the ships in which the crew travel. The movie has a really great way of capturing that feeling of desolate surroundings because of such filmmaking, and the combination of Mantle and Howard only add on to the magic they created in 2013’s “Rush”.

The performances are well acted, but nobody on the ships ever go above and beyond the average depth. That’s not to say that Chris Hemsworth, Cillian Murphy, and Benjamin Walker don’t do a good job. They are all well casted and play their roles to the best of the material they are given. The real problem comes once again in that faulty second half that forgets how well these characters were built in the opening of the movie. With Hemsworth’s character, there is certainly enough there to admire about this man. He loves his family, he has been screwed over repeatedly because he is the low man on the income pole, and he has a baby daughter on the way, giving him plenty of motivation to get back to his family. We never see this. It’s all forgotten in favor of tired looks and bearded messes. There’s nothing very inspiring about any of these characters, and I was worried that i would be lost in a field of unrelating muck, until a familiar face from another 2015 movie stood up and demanded more. Brendan Gleeson is leaps and bounds the very best performance of this film, and he isn’t even in the forefront of the ship story. His character is the survivor who is basically the narrator for the movie. We see so much in his slow, stuttering wording, as well as the tired face of a man who struggles for clarity in the terrible things he did to get back home. I mentioned earlier that we never see anything of visceral nature on-screen, but Gleeson had me convinced that I had been through those scenes and just forgotten about them. His performance is just that believable.

“In the Heart of the Sea” isn’t quite the epic that we deserved from such a monumental tale, but it’s gorgeous look, combined with a brilliantly structured first half, keeps the movie afloat despite the leaky problems of an anti-climatic second half.

4 thoughts on “In the Heart of the Sea”