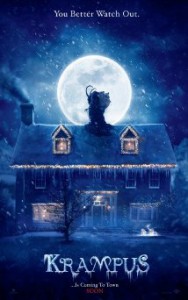 You better watch out, and you better not cry. Sinister forces invade from the sky tonight. “Krampus” stars Adam Scott, Toni Collette, and David Koechner in this Christmas themed horror centering around a little boy whose Christmas spirit is lost When his dysfunctional family clashes over the holidays. Young Max (Emjay Anthony) is disillusioned and turns his back on the holiday season, but little does he know, this lack of festive spirit has unleashed the wrath of Krampus: a demonic force of ancient evil intent on punishing non-believers. All hell breaks loose as beloved holiday icons take on a monstrous life of their own, laying siege to the fractured family’s home and forcing them to fight for each other if they hope to survive. “Krampus” is written and directed by Michael Dougherty, most notably known for another terror filled spin on another classic holiday icon in “Trick R Treat”. The monstrous legend stems from a real life wise tale in Austria, in which the Krampus is a goat-like creature that accompanies St. Nicholas (whom the Dutch call Sinterklaas, the name that Santa Claus is based upon) toterrorize naughty children. The design of the creature was developed from various postcards and illustrations of the creature over the year, according to Dougherty.

The film is a rather tough one to talk about, as I do believe that it will require future viewings to get my opinion just right. What I can say off the bat is that I had a lot of fun with this movie, despite it not being the most honest of trailers. If you are watching this film to be scared or to see some great horror sequences, you will more than likely be sadly disappointed. “Krampus” aims more for the kind of kid-like fun in it’s horror. This is evidence by the fact that there are no real nasty death scenes in the movie. Everything kind of happens off-screen, and allows the viewer to think of their own brutal fantasies after quick flashes of the horrifying creatures. What the movie does great is it’s representation of the real nastiness of the holiday season. The movie starts off with a montage collection of Black Friday beatings that kickstart this film as the perfect representation of everything that is anti-Christmas. Almost immediatly, we are presented with a darkness of holidays that many films before haven’t dared to tread on, and that kind of bravery is what gives “Krampus” it’s legs, or better yet, it’s hooves.

Where the film loses me is in it’s presentation, mostly in a two-movie kind of feel that never quite blends perfectly with one another. The first movie is a black comedy, filled with lots of setup for our main characters and the bickering that they do with their immediate family members. Nothing ever really made me laugh that was intentional, but there are a few lines that will garner a quick chuckle or two out of someone who has been put through one of these brutal family traditions. Then there is the second movie, a by the book kind of horror film that while not brutal in it’s gore, does follow the rules of perfectly created suspense for the scare that is coming right around the corner. Why these two movies don’t work is because the film alternates back and forth quite often. Neither side is given the kind of freedom in tone to tell it’s story without alienating the other one. If you like to watch something campy and downright silly, this movie will win you over easily, but I always have trouble investing myself into a movie that I’m not supposed to take seriously in the first place.

I mentioned earlier about most of the monster’s doings being done off screen, but we do get the occasional shot at the real horror that we are dealing with here. Daugherty hits an misses with a mixture of practical and CGI effects that pay tribute to the genre for both young and old fans. The practical effects look strong, especially under the kind of mood lighting that the film has for itself. The film takes place during a power outage in this suburban neighborhood, so many of the creatures blend in with the traditional Christmas sets and toys that adorn the family’s home. I greatly enjoyed one reveal that included a real slimy creature overtaking the body of a nutcracker doll, and the practical uses of wires and strings to show-off his vicious fangs. Then, there is the CGI effects that took away any momentum that the terrifying looking creatures built up. One scene in particular has Gingerbread men attacking an actor while yelling in unison with squeaky chipmunk sounding voices that couldn’t do anything but make me laugh. This also presents a big problem with the movie’s title character. There just isn’t enough scenes with Krampus to give this character a memorable personality, or a monumental payoff with the big unveiling. I did enjoy the ending’s creativity with a solid twist reminiscent of 80’s Tv show “St Elsewhere”, but I feel like the movie never really needs one character to stand out above the rest. This film would’ve been fine with a bunch of Christmas trademarks acting as the antagonist.

Much credit of the movie’s transitional scenes during the first act go to a well experienced cast of comic actors reacting off of each other. Adam Scott and Toni Collette play a husband and wife duo who have clearly seen better days. Collette doesn’t have a lot to do, but she is always kind of the voice of reason when it comes to their approach with this beast they are learning about for the first time. It’s nice to see Scott receive leading man status, and his interractions with supporting actor extrordinaire David Koechner make for the most enjoyable and respresentative of in-law dialogue. Koechner is easily the best part of this film, as a snarky and disrespectful brother in-law to Collette’s character. His reactions to the terrors going on around him, give the movie it’s best chance to succeed in whatever direction tone-wise that you decide to view this film. Emjay Anthony is also a welcoming child actor presence without feeling over the top with his performance. It all kind of comes full circle for his character, as he is the one who asked for Krampus, so we get to learn the most about his character and the transformation that follows.

“Krampus” isn’t the tastiest of holiday treats, but it does offer enough sweets in unapologetic carnage, as well as eye-opening social commentary for the forgotten true identity of the holiday spirit. If you seek a movie self-aware in it’s ridiculous nature, this one is definitely worth a look.