Hey Freaks,
Our 7th edition of Tier Rankings brings forth one of the most praised directors of the 21st century; David Fincher. Through a filmography that has turned out some of the best films of the past three decades, David has earned vast praise among the hardcore movie elite, and has conjured up no shortage of gritty style when doing so. What are your rankings for David’s directed films? Leave a comment below 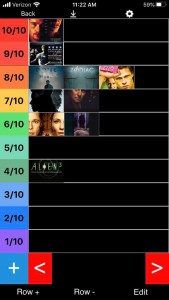