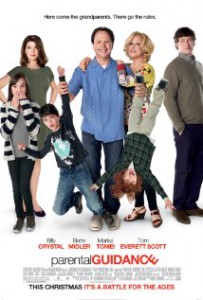 Not a bad little movie for the family. Billy Crystal brings his status quo of wit and charm to a slapstick movie that is a little different for him. I did only give this film a 5.5 because it does have some problems. This just doesn’t seem like the kind of film Crystal is normally in. It does have it’s wits and charms, but the film seems more along the lines of a Kevin James or Adam Sandler film. I understand Crystal was cast because of the age of the character, but his kind of humor almost seems outdated in a film like this. The casting is also a bit of an issue with Marisa Tomei playing Crystal’s daughter. Billy is 16 years older than Marisa in real life and Tomei looks almost to old to play the daughter in this film. It’s a shame that Thomas Everitt Scott is left with nothing to do in this film. He is someone who i have come to admire a lot in the last 15 years as an actor, but he almost never stars in a film. Parental Guidance had a couple parts that put more of a smile on my face than a laugh. Not sure if that is what the director was going for, but i look at this as more of a cute film than a funny one. The kids were a perfect fit for the movie. Bailee Madison is slowly taking over as one of the better child stars, today. If you have a family night, i recommend giving this a shot. I think it’s a film that the adults and the kids will get a kick out of.