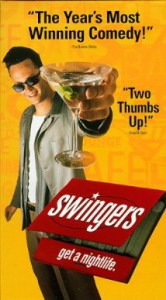 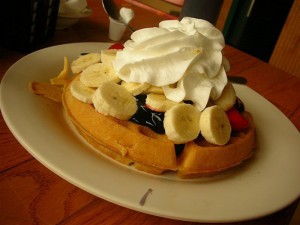 The SWING of a new semester

By Chris Kessinger (The Film Freak)

With the start of another school year, i searched my DVD library for a film that represented the college life that might have passed by today’s crop of young students. The film i chose doesn’t necessarily have anything to do with curriculum or the college backdrop itself, but it is the perfect representation for groups getting together searching for a Friday night of escapism and intrigue. ‘Swingers’ is a film writen and starring Jon Favreau, about a group of guys all in their 20s, all coping with the mysteries of life and women, set in the back streets and sometimes hidden clubs of Hollywood, California. Mike (Favreau) is down in the dumps because he left his girlfriend behind in New York when he came to Hollywood to seek his acting fortune. Instead, he’s found loneliness and the blues. Now, after six months of dealing with Mike, his buddy Trent (Vaughn) and the other swingers have had enough. It’s time to bring Mike back to life.

I really enjoy the film because of it’s authenticity to the kinds of conversations i have had with my male friends. Fear not though ladies, there are a lot of hidden gems in the film for you to soak in about the true secrets of the male psychology and how it relates to the opposite sex. There are many key scenes to what makes the film work, but i think it’s the character building backstory scenes between the group that tells the audience more than any big screen production ever could. The film shows us that there are many different kinds of friendships that make us the people we are. Trent is the asshole in Mike’s life. He’s cocky, fast-spoken, and insensitive to the kind of beautiful babies (His words, not mine) that he is trying to attain. Mike also has a friend who moved from New York to LA with him, named Rob (Livingston). Rob is that caring type who knows how Mike feels with the look of a facial reaction. It’s a nice balance of power for the audience to choose who they identify with in their own lives.

Some little known facts about the movie reveal that the apartment that Jon Favreau was living in at the time was used as his apartment from the movie. The film was made for less than 2 million dollars, so the production crew struggled with ideas on how to showcase extras in the movies. They decided to shoot at real Hollywood parties that were taking place the night of the shooting. It’s a shining example of rogue filmmaking at it’s finest.
Rise and dine

After a long night of scouting the hippest joints in the rubber city, check out one of my favorite breakfast joints, Wally Waffles. Wally’s opened it’s doors in 1975, and ever since then it has gained word of mouth as one of the best bangs for your buck, when seeking fuel to tackle whatever the day brings. Over the next forty years, this place has opened two new shops in the Akron area, showcasing AM domination on the East and West side of Akron’s expanding reach. So what makes this place special? I adore any restaurant that doesn’t stop serving breakfast just because your clock tells you it’s afternoon. For those of us who like to hit the snooze button, there are no restrictions. Whether it be deliciously mouth watering stacks of pancakes, or waffle combinations glazed in multi-flavored syrup from the breakfast gods above, there is no time limit for this edible perfection. If breakfast foods aren’t your craving, there is also a wide variety of PM meals sure to grab your attention. Signature dishes like the ‘Chicken and Waffles sandwich’, to some of the thickest burgers like ‘The Holy Cow’, will make you a regular to the Highland Square scene.

Film Freak Suggestion : I’m a morning and nighttime lover of food, so i will pack a tasty tag team to accomodate all readers. If the early bird truly catches the worm in your lifestyle, order the ‘Churro’, a Belgian waffle dipped in pancake batter, deep fried & topped with cinnamon sugar. It’s warm and sweet center is the perfect start during the most important meal of the day. For Lunch/Dinner? i love ‘The Pretzel and Nacho Cheese’. It’s an eight ounce beef slab on a pretzel bun, colliding with a combination of Bacon and Nacho Cheese. If it’s a light meal, i recommend their Grilled Chicken Salad. It’s healthy for the Akronite on the go, but it’s a nice offering for such a light meal.

You can read more of my reviews at:
thefilmfreak.com