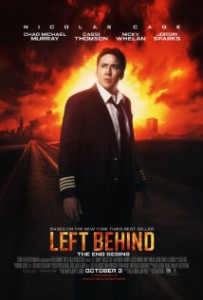 A pilot and father of two (Nicolas Cage) plans on a getaway rendezvous with an airplane stewardess he works with. He is a pilot on a flight to London when the rapture hits the world, and millions of people vanish without a trace. Left Behind is the newest in religious propoganda films that is by far the worst of this film genre that i have seen this year. Before i begin, this review might be offensive to some who shutter any time i mention religious films not turning out good, and if you don’t want an honest review, leave now. There are so many things wrong with this film that i worry i will forget about something. First of all, the positives. Nicolas Cage is far too good of an actor to do a film like this. He feels asleep during the film, and it seems like more of a paycheck collect for someone who had tax evasion problems with the government last year. He doesn’t even feel like the main character in this film as a majority of screen time is spent on his daughter, Chloe (Cassi Thomson) and Chad Michael Murray. Murray is the lone good thing about this film. He plays a news journalist who rides shotgun opposite of Cage in the plane when half of the passengers disappear. Murray tries his hardest with his role, and it feels like he is happy just to be cast. The problem with him however is that he doesn’t have anyone else to bounce off of to create good drama in a film that never can get off the ground. The acting isn’t terrible, but there are many lines that scream out that this film will lead the film world in Razzie nominations this year. The action sequences visually look like something out of Sharknado with terrible green screen animation. There are points during the rapture where the people running on the street don’t look real.I even laughed at a couple of parts because the same running scene played over and over. I could tell because it was a wide shot where the same man carrying a big screen TV grabbed a woman and ripped her out of her car so he could steal it. Another big problem with the film is that it brings out the worst not only in religious people, but atheists as well. The religious people in the film come off as psychotics who are pushing their beliefs on the non-believers, and the atheists come off as heartless jerks who can never just respect others beliefs. So who do you root for in the movie? What do you look forward to in a film that has no antagonist, so therefore no conflict? Sure, the film has the rapture (A terrible tacky one at that), but what happens after that? What is left for the remaining hour that makes you even care about this film? The remainder of the film is about landing the plane that has been hit by another plane and supposedly has no severe damage other than a clipped wing. I can’t say enough about how unbelievable the ending is except that i am not stupid enough to believe even for a second that it’s plausible. SPOILERS SPOILERS – Cage and Murray need a mile long stretch to land the plane, but they don’t have enough fuel to get to an airport. The last hour of the film shows the two men trying to get ahold of Chloe their cell phones are getting no signal. Then, when Chloe is about to commit suicide, the phones magically work out of nowhere. Gee, that was convenient. Happy to hear from her father, she clears a construction zone road full of cones, trucks, and oil barrels. Cage can’t see the road, so Chloe has to light a fire to create runway lights. This is stupid for two reasons. The first is obviously that a plane leaking fuel and flying into fire is probably not a good idea for the passengers on board. The second is the eight or nine oil barrels surrounding the construction area that Chloe has already set on fire. It’s thinking like this that makes me think director Vic Armstrong didn’t care how much sense it made because he knew the religious crowds would see any movie about preserving your faith. You people are much smarter than this. There have been tons of films like this in 2014, and they will keep coming if you can overlook huge plotholes and faults in a film that features Jesus tones. The biggest hole to me is the fact that the film mentions all of the children of the world disappearing. So i guess this means even the evil ones huh? Oh forget about them? You know, the ones who kill their parents or accidentally drown animals. I guess they are forgiven. So if they are forgiven, why not the adults? I’m not going to pretend for a second that i enjoyed any of the Kirk Cameron Left Behind films, but they were a hell of a lot better than this dark day in October. The only part believable in Left Behind is the praying. Not for the safety of the passengers, but for the actors who wanted out of this film or to be “Left Behind”. Not recommended in any form.