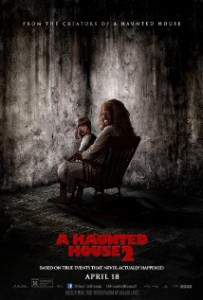 In 2013, i posted a review about A Haunted House that trashed the film for basically being an 80 minute sex joke. I called it crude, humorless and completely pointless. I would now like to personally apologize for everything i said about that film. A Haunted House is still a tasteless chud, but it’s sequel is where the real evil exists. Marlon Wayans returns as Malcolm Johnson. A man who is being plagued by evil spirits through two different girlfriends. This film acts as a spoof on such horror movies as Sinister, Paranormal Activity, Insidious and The Conjuring. I only enjoyed three of those films, but i can safely say that all four are better than A Haunted House 2. As to where sex jokes were the film’s premise in the first film, racism appears to be the schtick with this movie. Racism is everywhere and everything, it’s apparently supposed to be hilarious and i had no idea. Gabriel Iglesias shows up as a neighbor who is Mexican. I mention his heritage because the movie certainly does every 2 minutes. I am not someone who is a big Iglesias fan. Every joke in his arsenal is about him being Mexican or him being fat. It’s that simple. So when you hear he is in this film, it should come as no surprise that the person and the character are one and the same. Lets not stop there though because there are more sex jokes as well. Remember that amazing scene from the first film where Marlon Wayans is having nasty sex with a stuffed animal? You get to relive that whole scene times two with the doll from The Conjuring. He has sex with this thing for no reason what so ever. Somewhere in planet bizarre this is funny. All you have to know about this film is that it’s the rudest, crudest movie to come out this year…….BY FAR. I am all about a good comedy that is a little juvenile, but this is completely beyond the limit. On top of this, there are cussing children, scenes that don’t connect well with the scene that is directly after it, and THE MOST ANNOYING CHARACTER that i have seen in a long time. For those of you who thought Leonardo Dicaprio said “Old Sport” too much in 2013’s The Great Gatsby, i laugh at your comment. Affion Crockett plays Malcolm’s cousin Ray-Ray, and he says the word “Cuz” no fewer than 90 times. I AM NOT KIDDING IN THE SLIGHTEST. I turned to my friend and said i would punch the screen if he said it one more time, and sure enough he did it in that exact second. The character is like nails on a chalkboard. Like Kenny Crumpton doing the weather for your funeral. Like Nickelback on repeat 24 hours a day. The camera always on thing doesn’t work as well for this movie because in scenes where it looks like a camera is on, there is no possible way a camera can be there. Cameras appear and disappear in character’s hands. I searched my mind to find even the slightest thing i liked about this film, and i could find nothing. The house they shot in looked nice. Does that count? The credits were error free in typing. How about that? A Haunted House 2 is on par with A Winter’s Tale for the absolute biggest disgrace i have seen this year. Time will tell by December 31st when we find out which one is worse, but for now i want to go to a very quiet place and rock back and forth. A Haunted House 2 is AWFUL. It doesn’t even deserve the 6% on Rotten Tomatoes. If you see it, you are only wasting your own money. The Film Freak warns all.